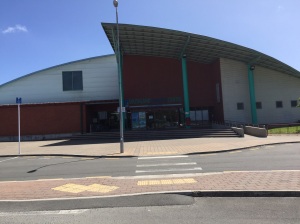 So, where does a personal trainer spend their day off? Why, in a sporting establishment of some sort! Yep, long swim training on the day off.

This schedule was a new experiment. Usually I do this swim on a weekday, but it was getting a bit crazy. Monday was too busy, so it ended up being on Tuesday, in between the morning and the afternoon spin classes! By Thursday (and 4 more spin classes) I was exhausted to say the least. so I tried a new schedule. Friday.

I have to say, when I realised that the Big Ruby was on 16 Jan I did feel a little shock and panic set in. Swim training had been sporadic at best. I have regularly swum each week, but only on an ‘as and when’ basis with no proper  plan.

When I discovered how close it was I went and did a panic long swim last week, I decided I had better make them a little more regular in the next few weeks, so I’m as prepared as I can be. It’s almost wet suit weather too, looking forward to that also!

Yes, I know, all the darned exercise I do in a week, what should I be worried about? well swim fitness is different to bike and run fitness. But, I was pleasantly surprised.

Today I decided to go for slightly longer than last week. My lap counter battery is flat so I went off the clock. I know what my average lap time is so it would be easy to work out a distance.

The ‘has the clock stopped’ phase

Around 20 mins in, I regrettably saw the clock. Man, I thought it had stopped. What, I have only being going 20 mins!!? What! It’s still only 20 mins!? I though it was at least an hour by now!! It’s like anyone’s training session, my hubby says he experiences runs like this. Some days you think you’ve gone miles and it’s only been two, others you fly along with ease.

I began to feel better again and the next time I saw the clock, it was 50 mins. This swim today was rather tedious, the pool was empty and I was doing a crap job of keeping my mind empty! I love to people watch while I am swimming, but three swimmers got in, did their session and left again while I was still swimming up and down. I must have been keeping a steadier pace than the others, because one was faster than me when he got in and slower by the time he got out again!

The ‘surely I’m there now’ phase

I reached just beyond my target time and by this time I had lost the will to continue. My head wasn’t used to having these goggles on so long, my eyes felt like they were being sucked out! I stopped at around 3250m. The Ruby is 3800m.

Pretty happy tbh on next to no regular long swim training. Friday worked out way better too, I made it to Thursday much easier without the mad rush Tuesday swim.

But, I have to say I find the long swim quite therapeutic, once I have gotten my mind around the monotony of it and just focus in the moment!

Note to self: take a snack next time for afterwards!

← There are no short cuts to fitness!
Otatara Retreat: blissful stillness of the mind →