Today was destined to be a long long day. A trip to Auckland and back again, 4 planes and 2 airport shuttles, plus three hours of study in the middle. Up at 3:30am, won’t be back till midnight!

Breakfast: small airplane muffin
Lunch: toasted ham and tomato sandwich (all that I could find in the ten mins available, that wasn’t a cake!)
Dinner: small basil pesto and sundried tomato salad

Today was dedicated to getting up to my tutor in Auckland to finish the last practical parts of my PT qualification. If order to manage this I left on the first flight from Dunedin (Invercargill flights weren’t at the right times) and returned on the last plane. Both had to go via Wellington, which was cool in itself, because I haven’t been there, or flown into there, so didn’t know what to expect. I was surprised that the Cook straight seemed so short (compared to the Foveaux straight) and equally surprised at the runway into Wellington – which has water at both ends!

The last time I was in Auckland was at the World championships. I would never had thought in a million years that the next visit would be as a resident! It seems a little surreal! I was meeting my tutor in the north shore, another area I haven’t been, but there was no time to sight see, unfortunately, which is a shame because today was hot hot hot! I was briefly based in the Takepuna area, which has a beautiful beach that I didn’t get to see.

The coursework today involved practicals. I had to prove that I could take someone through a gym introduction, screening and health checks and a PT session including demonstrating and instruction the session, both given and self written. It was all really straight forwards, the tutor as lovely, and I am so glad I made the marathon trip, because doing it like this made getting the coursework all finished nice and straight forwards.

They did have a cool treadmill there, the likes of which I haven’t seen before. It’s belt was on a curve, like a saucer, so the force of your feet out in front of you moves the belt rather than a motor, simulating the action of running outside a little more closely. Neat idea, I always did think treadmills were a little odd, because the propulsion was done for you making running outside feel hard after using them. 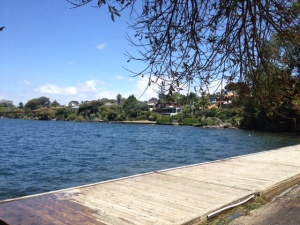 I had just under an hour left after I was done, before the shuttle came back for me, so I went for a stroll to Lake Pupuke in Takepuna. The a north shore rowing club house is based here. I do feel incredibly grateful for our club being on such a great river, this little lake seemed so small, compared to what water we have available!

All in all good day, if not a little exhausting!

← Day 18: me and buster on the river
Recipe: grilled pineapple with cinnamon yoghurt →