Singles rowing – peace on the river 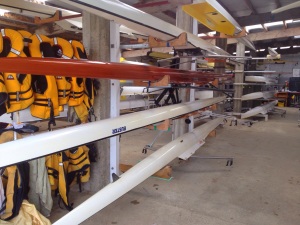 Today marked another first for me: first time unlocking the rowing club and first time taking myself out in a single. I mean alone, aka no one around at all.

I haven’t been out In a single since the South Island masters in June. Some of the masters won’t even row a single. It takes a certain amount of guts, as well as good balance and a strong core, along with solid technique. Any one of those things goes wrong, and you’re over the side and into the river. I haven’t fallen in at all yet. Some masters aren’t impressed with that and say that I am not a proper rower till I fall in! If that’s the case I don’t ever intend to be a ‘proper rower’!

There’s a few things I was a little apprehensive about. One was actually falling in. Having never done it, I wasn’t sure how I would go about rectifying the situation, was it to happen. No matter, think positive Mel, it will NOT happen!

I have also not ever got in / out of a single without assistance. I should actually take a photo of the boat next time or take the GoPro. Here isn’t much to them, and you actually sit on it, not in it!

Getting it out and back in the boat shed single handed. I took ‘buster’ in that photo. They’re actually really long, and it’s important to hold it in the right position so you can keep balance and not crash it’s nose into the floor!

You know, it actually went ok. I took the sculls down first, took the boat carefully off the shelf, leaving trestles out before I started. I took it straight to the water and put it in and was able to reach the sculls while still holding it.

I had been shown that the best way to get in and out of a single is to sit on the seat and straddle the boat, feet in the water either side. This was fine. The tricky part for me was getting the legs back in once I had pushed off, then getting my feet in the shoes!

I headed up the river. It presents a challenge in itself, the river curves more, and there’s a bridge to negotiate. Thank goodness nothing else was out there because I didn’t exactly take the straightest line, and I would have been arrested for careless driving if it was a road! Still, I didn’t hit the bridge which is always good! I mastered the art of looking round to check direction while facing the other way, I picked up a tip form another masters rower: turn with your neck but not your shoulders, that has minimal effect on the boat’s balance. 🙂

I rowed up the river further than I had planned to. Things were going well, so I headed on past the first maimai (hut) to the second one. By the time I had turned round, I was back into my stride and was able to put some efforts in on the return leg. I was actually surprised how quickly I gained my confidence back, considering how wary and wobbly I was and how little I have been out in a single.

The thing with a single though, is OMG you don’t half notice your mistakes. I was able to focus on the arms, the pull phase, as I have been told that my finish isn’t fast enough. So, once I was on the way back, I began focussing on that. You wobble or your steering goes off if you get it wrong, so it’s real easy to see the mistakes when you’re on your own.

I actually really enjoyed it once my nerves had gone, and I found it really quite therapeutic and peaceful, floating on the river all on my own.

I didn’t have a watch, I forgot to bring the water roof one. When I got back I checked, I had been out an hour!

A successful session, all told. 😀

← How NOT to use a rowing machine!
Living life for the positives →