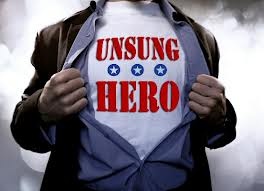 My unsung hero is going to remain nameless. That’s because they are the kind of person who doesn’t like drawing attention to themselves. They don’t ask for thanks, or help, they just do what they do.

This person has fought a few battles, some of which I am sure I don’t even know about. They first made themselves known to me when I first faced the knee problems that eventually ended my triathlon career. This person also had similar problems. They had not let it stop them. In fact, they were still winning races regardless. It made me wonder what might have been possible for them, had they not had the limitations that were placed upon them.

They have never complained, always smile, always look cheerful and positive. I often wonder how they do it.

They are currently battling a life threatening illness. Despite this, they remain forward focused and goal driven, speaking of future work commitments and recent promotions.

They are ever giving, meeting the needs of others, whilst privately scaffolding their own support structures to help them continue to battle life.

They never waste a moment, value everything, wish for nothing. They have been the creator of their own destiny, despite the curve balls life has thrown at them.

I bet if this person read this, they wouldn’t think that what they were doing was anything special. They have said they aren’t in fact brave, they are just doing the best that they can.

That is all you can ask of yourself, or anyone in this world.

← Do the same and expect different results?
How NOT to use a rowing machine! →