DOMS Tuesday; how to cope… 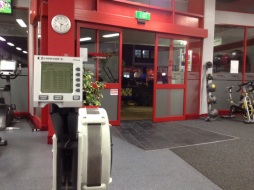 I guess I should have expected it, erg rowing at a good steady pace followed by a swim the following morning. However, it’s not all bad.

Monday was, let’s say, a challenging start to the week. Long day at work, missed the rowing club erg session, I simply wanted to go home, eat chocolate and drink beer. I don’t have to drive past the gym to get home, but it’s not exactly a million miles off route. I have no idea how I persuaded myself but I decided to go to the gym after all.

There is only one rowing machine there, and it was free.

My view was an odd one, straight out the open doors and onto the street, not that interesting, but never mind. Less to distract me! I now know what kind of /500m numbers to aim for, but the gym erg machine did seem a little ‘ropey’ compared to the rowing club ones, despite being the exact same make and model. I decided to give myself some stats lee-way. I have done these sessions once or twice so I have an idea of how to pace myself, aiming to row for 30 minutes and a good pace.

My previous two sessions in an indoor rower have been 25 minutes, the extra 5 didn’t actually make all that much difference. Overall, I managed to pace the 30 minutes very well, and upped my effort for the last 10 minutes. It is hard work though, and I don’t quite get the same leg drive on a machine as in a rowing boat despite a conscious effort on my part. I even knocked the resistance up to 7 (which the rowing club don’t normally do, there’s a certain level that is meant to replicate the open water).

I was quite pleased, given how little I felt like training, that I managed to get my butt there and do a reasonable job. I even allowed myself some weights while I was at it.

The following morning I had intended to swim. I am working on distance and in the morning before work, I don’t have as long as I would like. So I just swim, for as long as I have time to get as much distance in as I can. 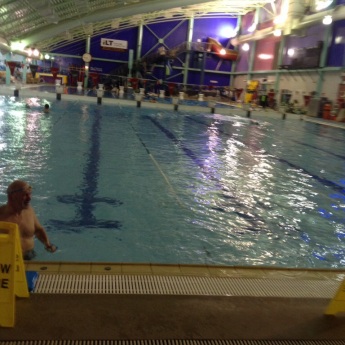 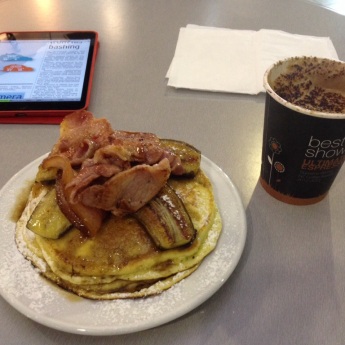 I knew immediately that my shoulders were tired. Swim through it, DOMS won’t kill me. After 300-400m I felt ok. Steady does it, 1300m I managed to squeeze in before I had to rush off for my pancake breakfast, and onwards to work!

How to deal with DOMS

← Quote: Be still, don’t rush, happiness will find you
Indoors is simply NOT like the outdoors! →