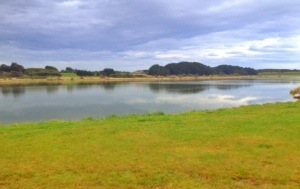 originally I was not going to go to the rowing club at all today, it was hammering down, and they don’t usually go out in a storm. When I got there, I would have not needed much of an excuse to go home and not row at all, it’s been a long day.

We originally were going to row a 4. The juniors were packing and off to a weekend regatta so not many boats left in the shed. Just as we were about to launch along came Julie. It’s ok, it’s beautiful water we can go out in singles, she volunteered me. AH!

I decided to continue to try it. Rome wasn’t built in one hour, now was it, although I would always have preferred if it was!

We went down river. It’s real hard spinning round and looking behind to check you’re heading the right way, and something I struggle to do in a quad never mind a single! I must have looked as terrified as I felt because the coach in the boat for the club next door said ‘you’ll be ok, don’t look so worried’ as I ‘rowed’ past, having just been thrown into the water, alone!

It took me – while to get the courage back to use my legs again, and I was so tense my technique was all wrong, my steering was shite and when the other guys rowed past in the quad, I was sitting rigid, clinging on for dear life, right in the middle of thinking to myself.. ‘ this is a blooming silly idea, I’m going to go to the shore and climb out, then walk back. I can’t do this, it’s a stupid idea thinking I can.’

Julie arrived in her single and started giving me words of encouragement. She did make me laugh when she said ‘I’m glad you find it hard, I would have been pissed off if you found it easy!’

I restored my technique to what it should have been, unscrewed the knots in my elbows, shoulders, wrists and hands, and began to restore normality. It helped me to actually not go round in circles!

By the time I returned I was using almost full slide, and feeling much less stressed, but tired form being so tense I think!

I know it will make me a better rower if I can learn to do a single well, (and give me a strong core!) but gosh it’s hard work, it really is.