Still more to go: the lul before the final storm!

Posted on February 6, 2014 by Melanie Ryding

Its been a strange day or so. I came back late last night from Dunedin, straight to sleep before another early up to go to the rowing club and help them load the boats onto the trailer for transportation up there for Saturday’s rowing races. I was curious to see how they did it with so many big expensive boats.

Its like a military operation and took a good few hours to de-rig them, get them all on, strap them, store all the rigging, oars, sculls and tressels. The calulation of what was needed exactly had been done before hand, by one of the coaches. Gosh, what an operation! I would HATE to be pulling that trailer, it was immensely long, and apparently takes up the whole road when they need to turn left or right.

The legs are sore today, from the track sprinting, but the photos are in and the photographer on day two got some good photos. 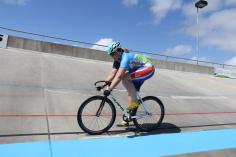 It’s a bit odd being right in the midst of a competition and having to crash back to earth for a days work on Friday, but it is the least I can do, since my employer has been so accommodating so early on in the year, and so soon after I started (day 2 in fact!).

So, rushing back off to Dunedin tomorrow evening, for a bright and breezy 7am start on Saturday, re-rigging the boats and preparing for the first race at 9am.

So far I think I might well have 6 races, although the singles is in doubt, since I have not even rowed a single before! But, I like to keep an open mind! Where better to learn your first singles row than in a major race! Hahahaa

Here’s my line up, I think I will need a big breakfast, I have three of these races back to back at the end of the morning!

Let’s hope that the weather plays the game too!