Posted on February 4, 2014 by Melanie Magowan

What an incredible day for surprises, for sure, and not just the obvious!

I haven’t been feeling too hot all week. I started with a cough late last week which has been getting worse. Side splitting, and head splitting. The kind that keeps you awake at night! Not great for VO2 max style track cycling. So my training running up to this has been a bit interrupted. Plus, stupid ass me forgot to take the contact lenses out last night and woke up half blind with blood shot eyes. Not a great start to race day!

I have only ever competed in track racing once before, have never ridden a concrete outdoor track, and only had a track bike around 2 months. Sufficed to say, I was taking this all in my stride simply as a learning experience in racing terms. 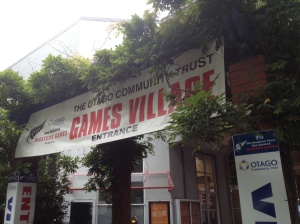 I drove up to Dunedin this morning, and was planning to stay with a friend. To be honest, when is found out that the 500m sprint was on Tuesday instead of with the rest on wednesday I almost pulled out.

I was greeted with this grand sign when I went to check in at ‘the games village’ and get my passes etc. Apart from this you would struggle to know anything was going on in Dunedin this week, it was the usual Kiwi ‘low key’.

The track is odd, I am not used to sitting on the grass in the sunshine watching races and waiting my turn! I am also not used to a headwind on the finish straight!

lucky me, as the youngest woman, I was up almost straight away. Eye still really sore, so I am racing this blind, in effect, because my glasses aren’t suitable for racing at all. But it’s ok, it’s round and round in circles, I will be fine! I had the inside of the two positions meaning I lead out the two lap sprint. The first lap is tactical, slow, the second a sprint, normally. Having never ever done this before I had no idea how to lead it out. While keeping my eye over my right shoulder Rachel dived underneath taking the sprinting line and winning the race. It was best of three so next time I was following. I thought that might be better, I could watch her and see what she was doing. What I didn’t know was she was slowing me down so she could take off like a bat out of hell (her speciality apparently) and win the second heat. Fairs fair, it was a good win to take gold, and I took silver. Oh My Gosh! I couldn’t believe it! Surely not! I still didn’t believe it till they handed the silver medal to me! (Yes, the other ones were gold and bronze coloured!)

In between all that I was playing about with the gears. I changed the bike to my smaller gear for the first heat. Well, I didn’t a fellow Cycling Southland friend did. It didn’t really work out.

I looked for someone to help me change it back. There was a guy wearing a British Cycling skin suit, so I asked him. He was happy to help. I know you can buy them so I didn’t think anything of it. We got chatting, he was telling me how he lives in NZ 1/2 the year, would like to get to Invercargill one year to ride on our indoor velodrome, so I gave him my business card and said call me if I and help out in any way.

Off he went to race. His name was announced. Max Pendleton. Funny, he has the same surname as Victoria, I thought. (Olympic gold medallist track cyclist from Britain). Meanwhile his wife was chatting to a local. ‘Are you related to victoria?’ He asked. ‘just a bit’ she replied. We are her parents’.

When they return to their seats (close by to me) I turn and say ‘I bet you get that all the time!’ ‘Yeah’ they agree. I suggest they get cycle tops made saying ‘yes, I AM!’ And they laugh.

I decide to leave it at that! What a small world, eh?

So, what on earth will tomorrow bring!? That’s anyones guess!

I dedicate that one to my beautiful mother Margaret. When I was forced to retire from triathlon, I vowed to stand on a podium in a sporting event and dedicate that to her.

I had no idea that day would be today.

Mum, this one was for you. Thank you for always believing in me, even when I didn’t. X