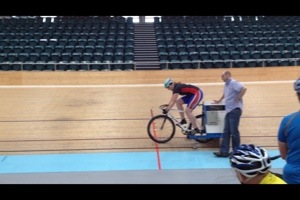 Today’s session left me gasping and wheezing all afternoon. I dragged my ass there today, not 100% ready for the inevitable onslaught.

I usually struggle to complete it and come away feeling naffed off. Also I wasn’t having too good a day, mentally, before I even got there.

I rocked up and the group were already rolling round. The coach wasn’t there yet so there wasn’t the usual increasing pace structure to the warm up. There was a main group, a second group of three and a solo rider, all at different paces. I decided to please myself and just warm up at my own pace. They are usually way too fast anyway.

After a few steady laps the group passed me. All but the solo rider were now together. As they passed (not flying by like normal) I decided to put up the effort and see how long I can hold on. They were just a wee bit too fast, but a rider from the group peeled off an in behind me so I was committed to keep trying. Every half a lap, about a bike length gap opened. The rider that had peeled off would fill the gap, and for a teeny bit longer I was trying my best to cling onto the wheel. I managed this for about 4-6 laps before they cycled off into the distance.

I considered this a small miracle, considering warm ups were normally solo because they were usually way too fast for me. A tiny step forward, probably helped by the circumstance but I don’t care!

Today’s session was sprint starts+ flying lap and pursuit practice. Both things I need to practice but eeeeeek nevertheless.

Some of the men complained that this wasn’t stuff they needed to practice because they weren’t in those races. ‘Welcome to my world’ I thought! Oh well, you can’t please them all, all the time, I told them.

We were set off out of the gate one by one for a sprint start. 1 lap or 2, our choice. Starts, out of the gate are way harder than they look, as I demonstrate nicely here!

I asked someone to video me because I a kinaesthetic learner. I learn by seeing and doing. I can see that I need to pull and push way more when I set off, and lean back to use the straight leg initial leverage much more. (I think!)

I found it real hard to get up to speed quickly. I would happily practice it over and over but 3 times over was my lot for now: group session and all that. It allowed me to decide one thing anyway: although theoretically it’s meant to be easier on the track to start with the left, that one disastrous! Right leg up, it is then!

Then we were doing 4 lap pursuits. We were told that the first lap was allowed to be 4 seconds slower than the rest (due to the standing start) then we had to aim to have all the other laps at least equal, if not progressively faster each time. They spoke of the second lap feeling ‘floaty’. That’s fine, pacing I find easy, ish, because I internalise my effort and know how it feels rather than externalise it and base it on numbers, i.e. the speedo. Coach said we should expect the first lap to be 24-27 sec for women, then 4 sec faster than that, roughly, afterwards. Unless you’re Erin, the world masters champion in my age group, also from Invercargill. All her laps were within 1.5 seconds, 18.5-20 secs, even her first one from standing. Wow!

Anyhow, I almost killed myself with the effort but I was pretty impressed, my stats per lap were 28.6, 22.8, 22.4, 21.7 – precisely what I was asked to do. No speedo, never done it before! Granted, I’m still the slowest by around 3 secs over the km, but the pacing was perfect! Then we were asked to do it again. OMG!! I really wasn’t sure my legs would do it again and my lungs were still hurting from the first one, never mind my legs!!!

I was left gasping for breath, lying on the ground, and asthmatic cough all afternoon. When I got home OH said ‘you look tired’!

Problem is, one pursuit race is actually 2km – 8 laps! And, I have to qualify and get into the top 4 to make the final! Ack!!!

More small steps forwards, and only 2 weeks till the Southland champs!