Posted on November 6, 2013 by Melanie Ryding 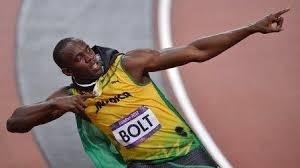 I found this article in GQ.com.au and its worth a look. I took out my favourite tips of all, and here they all are.

You need power for the glory

“My favourite exercise in the weights room is the clean,” says Bolt, who sees weight training as a necessary evil. From a standing position, with legs shoulder-width apart, he smoothly lifts the barbell from feet to chest. “I’m not really that good at lifting weights,” he admits. “A lot of people can bench-press 250kg; I probably bench 140kg. I just go heavy enough to develop the muscles. What really matters is what you do out on the track.”

A strong core helps you score

“I work on this a lot — it’s vitally important. I do a few exercises on my core in training,” he says, “but in addition three times per week at home I do one hour strictly on abs and back work – a variety of lots of exercises.” His goal is not necessarily to help his sprinting, either… “I do it mainly because it makes my sixpack look pretty good! I can’t really complain about it.”

It’s a sprint, not a marathon

Bolt reveals he rarely runs farther than one lap of the track. “I don’t really do any cardio in training,” he says, preferring to focus on quality over quantity. “It’s hot anyway in Jamaica, so we burn a lot of calories when training. Even just warming up I would be sweating hard.” Even so, his longest run is surprisingly short. “This season, probably 350m. A couple of times I have run 600m in the past, but that’s as far as I’ve ever been.”

Despite famously eating chicken nuggets before one of his races at the Beijing Olympics, Bolt’s junk-food diet is a bit of a myth. He explains, “When I’m travelling overseas, if the food is not so good I might end up in Burger King or McDonald’s occasionally. But I have a chef now who gives me everything I need.” Bolt consumes lots of chicken, pork, fish and yams — a good source of carbohydrates and a Jamaican staple. “Every now and again I go for fast food, but 90 per cent of my diet is good.”

Enlist a coach with the most

Glen Mills has coached Bolt since after the 2004 Olympics. “Having a good coach is important and I owe much of my success to him,” says the athlete. Something of a father figure to the 24-year-old Bolt, Mills’s background includes more than 20 years as head coach of the Jamaican Olympic athletics squad. “He is a guiding light in my career and has shown me the way to improve myself both as a person and as an athlete,” says Bolt.

Bolt says it’s in his nature to remain cool before races, but he also makes a point of creating lots of down time: “It’s just my personality to be so relaxed. The majority of the time I’m chillin’. I’m always with friends and laughing — that’s just me. If I’m not doing that then I’m playing video games and still relaxing.” He stays loose racing, too. “The more relaxed you are, the smoother and faster you’ll run. Your muscles get tight when you tense up,” he says.

Believe, and you can achieve…

Bolt’s world records have astounded athletics experts, but he believes he can run even faster. After that he wants to play football for Manchester United, telling GQ he could have made a difference in last year’s European soccer Champions League final. “I was shouting to Alex Ferguson to bring me on as a substitute,” he says. “But he didn’t hear me.”