Have chosen a number of unpopular options in my life, that is what gives me a buzz, and a drive to achieve what others think I cannot. The first significant one was back in around 1998.

It was a sequence of events involving rugby that was to see me achieve a world first as well. 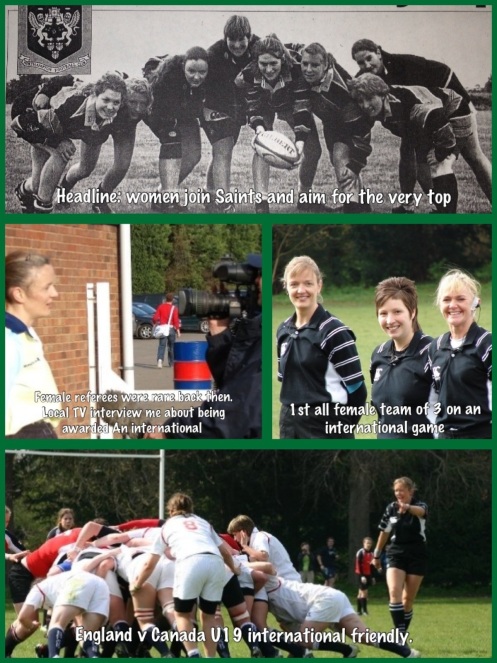 Going back 15 years ago, local female rugby teams were a rarity. I had recently moved to the area from Bath, a big rugby town. I fancied having a go at rugby, but struggled to find a team. At the time, Northampton Saints were trying to also set up a girls team. A serious injury at the start of only my second season meant that I had to have an ACL operation. It was a major operation then, so that put an end to my rugby career.

I was recruited to the referees training course from my hospital bed by a female referee who was a nurse on my ward. She was the only female referee in the area. I was to become only the second qualified referee that was female in the East Midlands. While on crutches recovering from major surgery, I completed the training, then started refereeing the following February. The local teams thought I was the ball girl, and looked over my shoulder asking where the referee was.

It took me a long time to gain respect in what was most definitely a mans world. I decided to get fit and transform myself, and after losing 4.5 stone I looked more like a ‘referee’ but always had to prove myself more than the average male referee to gain the same qualifications and the same respect. I saw it as a challenge.

I ploughed away at it, and after a few years got to a decent level. I was rewarded for my hard work by gaining the accolade of being part of the very first all female team of officials to referee an international. This was the first time the RFU had put out an all female team. Together we officiated a series of international friendlies between England, USA and Canada. Back then the women weren’t allowed to play in Twickenham, so the game took place in RAF Halton. History was made.

I made this one of my last games, because. Now need a new challenge. I went on to gain a spot on Team GB travelling worldwide to represent my country at world and European level, but that’s a whole different chapter of the story!

← The sea, me and you
Christmas thoughts →