Today I planned to recce the bike course, but when I opened the curtains, it was raining. Hmmmm, almost put me off but I thought I would check it out after breakfast. Then it just got worse, and when I looked again, it was now hammering down. I decided to pass on that, and go tomorrow, in the hope that it will be better.

After waiting it out a bit, as usual, the weather changes dramatically within minutes and soon it was sun shining again! We went down to the coffee shop to meet my coach for a post race chat. She was full of reassurances. We talked about the knee, training, the race on Monday and me getting lots of rest and ignoring all the others who seem to be training like mad, but then I do that anyway!

Register for the race, answer a silly questionnaire and off we went for a walk up the high street. Lots and lots and lots of chinese shops, it felt like we were in Chinatown. Even the woman in the French restaurant was Chinese! I still didn’t feel too good so went for a salad, which to be honest, I didn’t really want to eat it but knew I had to.

Back to the hotel and more Jimmy practice again, it’s hard work, and he is really heavy, specially getting him from racing hand bike to racing wheelchair!

Next dash – down to the parade. It was starting off from North Wharf, but it seemed rather difficult to organise the sheer number of people taking part. 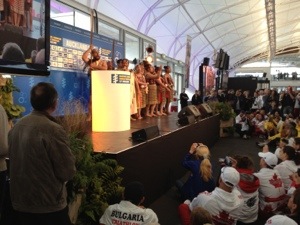 They said that 4500 people were there, it took ages for it to start off and get going. It was quite nice though, as they walked the parade quite a long way along the front to get to the cloud for the formalities. There were a lot of spectators lining the route, taking photos which made us feel really special. the local TV ‘one news’ was there, covering the event too. through sheer northern-ness I managed to get myself interviewed by tapping her on the shoulder and declaring to the presenter that she simply HAD to get my nails on her TV programme!

A local mauri tribe greeted us, did some traditional dancing and the Haka, before the formal parts of the ceremony. With the oaths and pledges. We decided to give the ‘pasta party’ bit a miss, with takeaway looking food and massive massive queues, Catherine decided to join us and we went back to the stables for another visit, we’ll it seemed rude not to with so much culinary choice.

Lets see if I actually feel ok later and tomorrow, I hope so, as it will be the first time I have eaten without feeling sick. That needs to go quite quickly, I have an important race to do!