Ok, so I woke at 4am! Not sure if that is a good or bad thing! I have been getting up at 4am when back in the UK, as a way of trying to get adjusted to the time difference.

We couldn’t get back to sleep so we decided to build the bike instead! When I opened the curtains, I realised we have a cracking view of the sky tower!

We went down to breakfast at 7:30am to join the Paratriathlon team breakfast, meet and chat to Jimmy a bit more and the other paratri team. Interestingly steve and jonathan Riall were there, and steve actually said hello, for the first time ever.

I went to the Cloud with my pink roll of kinesiology tape to find a physio that would be able to tape it for me. We had a nice chat about my truly knackered knee, and he end up taping it for free! I have to let him know how it goes and if its o good he said he could try rigid strapping for the next one.

It looks very dramatic, it’s a shame I don’t have Union Jack kinesio because that would look very cool!

Got to chat to Catherine Yarroll, gutted for her that she has a DVT and can’t race.

Quick walk round the expo, some merchandise purchasing and it was a Westgate mall omelette lunch then back to the hotel to relax before the race. Felt very chilled still, either this is very good or very ver bad! 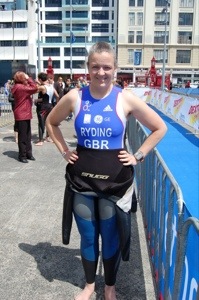 The transition was incredibly long, and obviously we were meant to run the length of it, but there were no landmarks at all to identify your spot from.

After being taken through a series of holding pens, and hearing that Paul Jennings was actually leading the swim(!) Emma came past, and said hello, wished me good luck (as did I to her) then I was onto the pontoon. Fast turn round, we only had one minuted from being taken there, to being put in the water and started off. The water temperature was ok (by chilly British standards) but the water was very very salty. I didn’t get the ideal pontoon position, right in the middle and it took some time for the melee to even itself out. The real games began when we reached the end of the pier, then oh my gosh, it was incredibly choppy, very very high waves, I struggled to see the swimmer in front, never mind the buoys.

The waves were so high I began to feel quite sick, and had to breast stroke for a bit. Most of the middle portion of the swim was like this. It was incredibly difficult To see to navigate, the waves were huge and by the time I exited the swim I knew I was minutes and minutes down on my usual time, and was feeling really rather sick. I regretted not leaving water in transition, but I just didn’t think I would need it. I started the run feeling really rather awful, and the race belt sensation round my stomach was almost unbearable. People began running away from me. I knew that I just had to back off my usual race pace a bit, because up chuck did not feel that far away. I have never felt so awful in a race ever before.

I focused on me, and trying to stay calm, Do much so I kind of forgot about the run form till a mile or so into the run. As the run progressed I started t Feel a bit better, and when I knew I was on the return, I began to put the focUs back into running form. When I passed mark for the second time, I was feeling considerably better than on the way out.

Result? Not my golden hour, but I didn’t expect it to be, less than 24 hours after landing. I also found out there were some DNF’s as people bailed out after the swim, several were sick and many reported feeling very unwell.

What did I learn?

In the results, I was also very surprised to see many GB athletes that I would expect to win medals in fact were often owners near the top of the table. Some world Aquathlon champions in the paratri team lost their titles too.

Because Australia and New Zealand are so geographically isolated, I think what is happening here is many many athletes that do not normally travel have come out of semi retirement with it being a home race. Thus, the bar is high, and probably in a completely different place than it has been before.

i think what was also happening was that the locals are much more accustomed to huge surf, and thus Aussies and kiwis came out of the swim miles in front of everyone else.

Not exactly a race that went to plan, but the Aquathlon is only ever a learning experience, and I certainly learned heaps today, in preparation for Monday.

We did some transition practice with jimmy, which was really interesting. It’s strange and odd adjusting to someone’s disability and the ways around that to help them from chair to chair, it’s not easy.

Back to the stables for tea, with Catherine, and pasta this time. I still do not feel brilliant, and had to lie with a cuppa for a bit before I felt we’ll enough to write this. I hope this sick feeling goes away soon.