Race report, photos and video footage of my trip to Eilat for the European Triathlon championships 2012

The weather was forecast to be 36 degrees, partial cloud and a strong wind, headwinds out to the turn point on the bike course. When I got up, the cloud cover was welcomed, as I knew clear skies would mean a very hot run indeed.

Last minute set ups, pump the tyres on the bike back up (I let them down because it had been racked in the 36-40 degree sunshine since 4pm the previous day) and I was out of transition with plenty of time to spare before I had to be in the pre start areas. 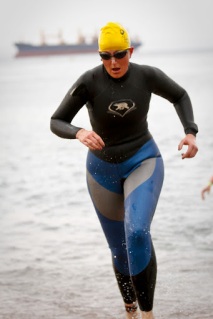 After the pre start, we had to line up on the beach along some matting that had numbered squares. I was aiming to get a spot towards the left side of the start line, but sadly, was muscled out of position by other more forthright athletes, meaning I ended up at the far end of the line, with all the local non wet suited athletes. No problem, I thought, it simply meant that I would need to sprint down the beach and swim out hard to get clear water. The start went to plan, and up to the turn I had the leader in sight. On the return leg it didn’t seem to go quite so well, and the leaders got away. Every time I turned left to breathe I had sight of an Israeli athlete who was keeping up with me, while NOT wearing a wet suit! Perhaps I should have continued the ‘swim hard’ and not backed off quite as much. 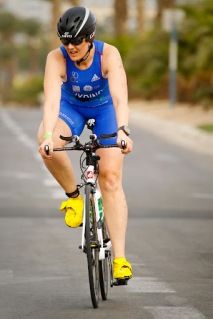 The run to T1 was LENGTHY! It went up the beach, through a shower, past some shops, round a car park, past two hotels and through the expo! This did me no favours and Angela Ackerley caught me up in T1 while I was wrestling with my wet suit heels!

The bike course was a very gradual but constant 10km upwards incline into a head wind, and it felt relentless! The speedo was not showing me nice numbers at all and all I could do was grind it out and grit my teeth till I got to the turn knowing that the return leg would be much easier. The ‘bridge’ that scaled the central crash barriers was hilariously small and shallow, with a very short steep ramp up, and only one lane wide instead of the expected two. I couldn’t understand why they hadn’t used the whole width of the road. A marshall was positioned on the bridge to ‘catch’ you as you attempted to negotiate the tight turn, and I was forced to unclip to make it round and down the other side.

I set off in pursuit of all the small athlete ‘targets’ that I picked off one at a time on the decent,  stopping for no one, no brakes, not even for the speed bumps at 12km! As I approached the left turn roundabout to take me back round the airfield, a male back marker held me up, but so did the ITU bike! Don’t mess with them, I thought, so held off till there was a safe point to get past. 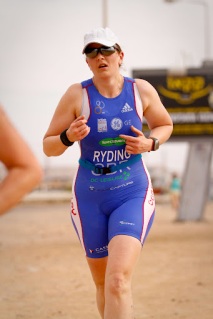 Into T1 I knew I was still third Brit, but I didn’t know by how much. I set off on the run and immediately discovered that the legs didn’t feel as smooth as they usually do. It was at this point that the cheers on the run course were vital. There were some people dotted about, cheering on GB, and it lifted me. I saw that 4th GB was a whole dog leg behind, so I thought that perhaps I might have done enough to hang on to my position. On lap 2 (of 2) I could no longer see her, little did I know that she was in fact chasing me down and with 500m to go, she came past. With a jolt, I immediately kicked, I was determined NOT to lose any age group positions on the run leg – which would be a first if I could manage it. I sprinted for my life. I had no idea if she had a sprint finish in her legs, it was the first time I had raced her. At the turn into the finish shute (around 150m to go) I glanced over my shoulder. She was only a few metres back. It wasn’t enough to be sure, I was going to have to sprint all the way to the line! I had not sprint finished from so far out before, I didn’t know if I had it in me. I continued to give it everything, and crossed the line in 5th position and 3rd Brit, managing to pass another GB athlete (45-49) in the process, which was a bonus! 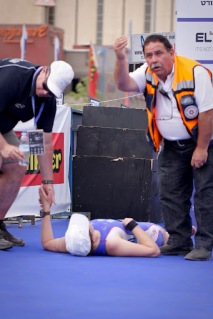 Then I collapsed. I had given it EVERYTHING in that final sprint, absolutely everything. I was assisted by three officials, who tipped water on me, in my mouth, then helped me to my feet and assisted my walk to the recovery tent.

Several minutes later, I was ok. Proud to say I achieved 5th position, 3rd Brit. I patiently await British Triathlon writing their 2013 prequalification policy for 2013, so I can see if I did enough for a pre qualification. 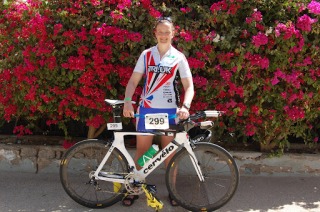 For the rest of the photos, visit my facebook page.
Video footage of the races.

← And They’re OFF! Jane’s Appeal 8 Day Paris to london challenge
The Perishing Waters of Box End →