What are the benefits of hill running?

People often tell me that hill running is the way to get strong, fit and fast, but why is that? In general, people know that if you build stronger muscles, then you will become more powerful, therefore a faster runner. How does hill running fit into this? How does it all relate to building strength?

There are a number of ways that can be done:

This is a way of training you muscles to develop explosive power. Much of the plyometrics approach involves explosive vertical jump related exercises. My coach uses this in conjunction with strength and conditioning.

Strength and conditioning is a way of training and developing strength, but not the usual ‘isolate muscles one by one in the gym’ approach. It seamlessly incorporates muscular endurance, strength, power, speed, aerobic / anaerobic conditioning all at once.

Historically it was thought that the best way to strengthen the muscles was to tackle them one by one. That’s why gyms up and down the country have a fancy array of machines that work each muscle group one by one. This is, however, not all that logical. If you consider how you use and engage your muscles, you will know that they are never engaged in isolation, but always in conjunction with a wide range of other muscles. This is the foundational belief on which the strength and conditioning approach has been based. Stone, Plisk and Collins (Sports Biomechanics, 2002) evaluate modes and methods of resistance training and note that free weights are better than machine weights, for this same reason.

Where does hill running fit into this? 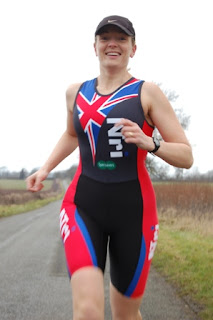 Hill running does what plyometrics and strength and conditioning does, but in a running context. When running up hill, you are fighting gravity which means you are requiring more strength to drag your body weight up the incline, added strength work that cannot be replicated in track sprinting. While you are doing this, you are still using all your muscle groups, in conjunction with each other, as well as working the core and cardio vascular system, in order to run up that hill. Justin Daerr, a professional triathlete, was interviewed about hill running in episode 245, by IMTALK. He said that hill running is used to recruit fast twitch fibres, and to recruit your fast twitch muscle fibres, which are the ones that make you go fast, you need to increase load on your legs. The load is increased on each leg when running up hill. To do this on the flat would mean increased pace. Read more of Justin’s interview with IM TALK in my transcript of the podcast.

Conclusion
Since fast twitch muscle fibres are engaged when the intensity is high, and the hills increase the load on the leg due to the incline, power/weight ratio and gravity, it seems that hill repeats are a very good way to improve run speed, while avoiding the extremely high stress on the body that comes with track sprinting.

← ‘Catch’ Swim drills progression
What are the benefits of drinking Green Tea? →